The "Bicycle built for one world" organisation was “Promoting World Peace through Tandem Bicycling" and organised a tandem bike ride in different countries US, France, Australia an ...

The “Bicycle built for one world” organisation was “Promoting World Peace through Tandem Bicycling” and organised a tandem bike ride in different countries US, France, Australia and Russia for visually impaired.

A person who was a part of the Russian trip in 1993 visited Milan recently and joined our bike tour in the city.

We asked our tourists Steven about the details of this trip on tandems and we publish his story, as we find it very exciting!

The organizer of this tour was a friend of mine, Rhonda Tichman, who passed away in 2014. https://www.legacy.com/obituaries/sfgate/obituary.aspx?n=rhonda-tichman&pid=170038173.

Rhonda was a teacher who worked with the visually impaired. As her obituary stated, she had organized rides in California, France, Australia, and Russia.

Rhonda had tried for many years to organize a ride in Russia, but until the fall of communism, and the dissolution of the Soviet Union, she had been unable to obtain permission.

The trip to Russia had 24 people from around the world, including South Africa, Namibia, France, Australia, New Zealand, and the United States. We also had about ten Russians joining us, including Igor the Russian tour organizer, and Vladimir the mechanic.

We all traveled on our own and met in Moscow. We brought our own tandem bicycles as to find even one tandem bike in Russia in 1993 was impossible.

This was not a luxury trip. We stayed in very low cost hotels and hostels. Some of them looked like they were former hospitals. The food was also not very good in Russia. There were few fresh vegetables.

We gathered in Moscow at a zero star hotel for the first night. In the morning we unboxed our bicycles and began assembling them. One man from Marin County boasted that he had brought his tandem to a bicycle shop and had it “professionally packed in a box.” But the “professional packers” had failed to put the quick-release skewers for the wheels into the box. In 1993 in Russia, you could not buy bicycle parts. Whatever was needed had to be sent from Finland. It looked grim, the ride was scheduled to leave the next morning but without quick-release skewers that tandem could not be used.

As usual, I came to the rescue.

Prior to leaving the U.S. I had packed a duffle bag with every spare bicycle part I could find in the garage. Inside that very heavy duffle bag was a set of quick-release skewers. But they were too long for the bicycle with the missing skewers. Out back of the hotel was a chain link fence. The owner of the tandem found some rusty nuts on the fence-post clamps and took them to use as thick spacers. This kludge worked fine for the entire ride. 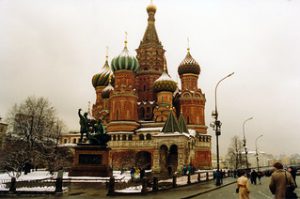 The ride in Russia went from Moscow to Saint Petersburg. We took eight days to go about 800km. Stops included Klin, Tver, Vyshny Volochyok, Valday, and Novgorod. I had a very strong stoker on the back of my bicycle so I was able to keep up with no problem. Some people had to ride the support bus for some stretches of the trip, but I wanted to do the whole ride.

In many cities we had police escorts and local cycling clubs joined us for short stretches of the ride. Unfortunately we did not bring enough gifts to give out to local cyclists. We ended up giving them some of our Power Bars, a U.S. energy bar that tastes terrible and has the consistency of wet cardboard. I can imagine them taking those hope and eating them and then deciding that life in Russia was actually pretty good if people in America were eating Power Bars.

As cyclists, food is very important. We were riding up to 80 miles per day. But the restaurants we stopped at were often not prepared for a group of 34 hungry riders. In one case we literally ate all the food the restaurant had and there was nothing more for them to cook. We also had a bus following us with a cook for those times when there were no restaurants available. We were also supplied with snacks along the way. Some of the food was strange, like chocolate bars from Egypt. There were also people selling food items along the road, though we didn’t partake of those delicacies. In Moscow, some of us committed the unpardonable sin of eating at a McDonald’s.

We had only a few mechanical problems, but our mechanic Vladimir was up to the task when they did occur. His main tool was a big hammer. The women on the trip gathered round whenever Vladimir was working on a bicycle with his shirt off. I left him my Park pedal wrench at the end of the tour.

Being in Russia, of course we had to be good guests and drink copious quantities of vodka every night.

We reached Saint Petersburg and had a police escort into town. We spend a couple of days in Saint Petersburg visiting the normal tourist places like the Hermitage. A few of us took Vladimir to a Chinese restaurant in Saint Petersburg because he said that he had never eated Chinese food. The food was very bland, but Vladimir insisted that it was way too spicy. We also taught Vladimir some good U.S. phrases like “Have your people call my people” and “let’s do lunch.”

At the end of the trip we took the train back to Moscow, stayed one more night, then boxed up our bicycles and flew home.

We collect many great stories of the tourists who join our bike tour in Milan and we will publish them in our blog.

You may also have an interesting story to tell?

Join our bike tour, tell us your incredible story and we will publish it here with pleasure!

The "Bicycle built for one world" organisation was “Promoting World Peace through Tandem Bicycling" and organised a tandem bike ride in different countries US, France, Australia an ...