Museums in Milan worth to visit Milan is not really famous for the museums and art lovers. But we assure you that the city has lots to offer! Check our list of museums of M ... 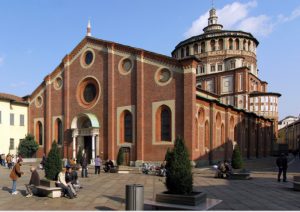 Milan is not really famous for the museums and art lovers. But we assure you that the city has lots to offer!

The most famous sight in the city and every tourist should see it. But Duomo is not only the Cathedral, but also a museum and an art gallery!

On the left hand side from the entrance you will see the stairs, that bring you to the archeological sight of an early christian church, that was on the square before.

You can also visit the rooftop of Duomo with all the incredible marble statues and the breathtaking view.

Moreover there is a museum of Duomo with lots of original pieces, statues, pictures, models  and other treasures.

Buy the full ticket of Duomo Milan. We recommend to buy the Full pass with stairs. It is not really high, but it is much faster, than lift. 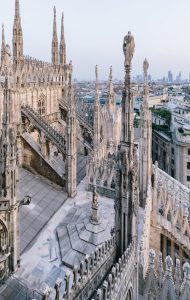 Also one of the most famous sights of Milan. Every second tourists try to visit it!

But we must warn you, that you should buy tickets beforehand online. O try to get last minute tickets to see the Last supper, find instructions in our article.

After you visit the Last Supper, find just across the road another interesting museum: Casa Atellani. The 15 century house of one of the richest family’s of Milan. A part of their garden belonged to Leonardo Da Vinci. He got this land as a payment for the Last supper painting for the Duke of Milan.

The house is still private, but the family permits to visit some locations and the garden, with the winery of Leonardo Da Vinci. 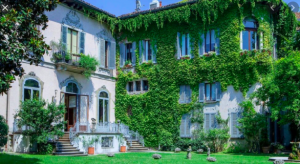 Pinacoteca di Brera is the biggest painting gallery in Milan with a rich collection of northern paintings.

It was based in the beginning of 18 century by Napoleon Bonaparte, who wanted to make sort of Louvre museum in Milan. Big part of the paintings were seized from the suppressed monasteries of Lombardy.

And in the middle of the courtyard of Brera gallery you will find a bronze statue of a naked handsome man. Who do you think he is? You’ll never guess! It is Napoleon Bonaparte! It may be your only chance to see naked Napoleon!

Moreover the Brera art gallery is situated in the most picturesque area of Milan. The narrow streets, small cozy bars and vintage shops. Don’t miss it!

In Milan there much more than just one art gallery! Ambrosiana is the great example of a private collection that was given to the city. The place itself has a rich history. It is situated on the main square of the Roman city – the Foro Romano of Milan.

Later it was one of the monasteries in Milan transformed in a library. By the way, it was the first public library in Italy opened in 1609! The bishop of Milan Federico Borromeo wanted to spread knowledges. He opened this library and some years later opens the Ambrosiana art gallery. He donated to this gallery all his private paintings!

You can see there rear pictures and paintings of Leonardo Da Vinci, Caravaggio, Raffaello, Tiziano and others.

Furthermore you can visit the oldest public library of Italy with the oldest books and manuscripts! 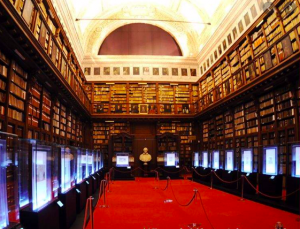 The last, but not the least is The Sforza Castle of Milan.

Castello Sforzesco used to be a city residenze of the Duke of Milan in 15th century. Inside you’ll find rich painted rooms, halls and precise pieces of furniture.

The Castel now is the museum now: there are many archeological findings, antique weapons, museum of the story of furniture, painting gallery, statues. But also there is a unique room Sala delle Asse. All the vault of this room was painted by Leonardo Da Vinci. He made a sort of the pergolas for the Duke’s family. The walls are the tree trunks and the vault is the branches and leaves.

Pay attention, you need to by the tickets for the Sala delle Asse online!

One more precious thing in the Sforza Castle with to see – Pietà of Michelangelo.

Michelangelo never worked in Milan. But in 20th century several rich families bought his last statue. He was working on it a couple of days before his death. Anyway, he died before. The stature remained unfinished. You can see the signs of the tools of Michelangelo. Impressive, isn’t it? 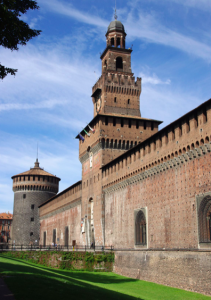 In this article we showed you museums of history and classic art.

More info about museums and the city of Milan you can get on our bike tours!

Museums in Milan worth to visit Milan is not really famous for the museums and art lovers. But we assure you that the city has lots to offer! Check our list of museums of M ...